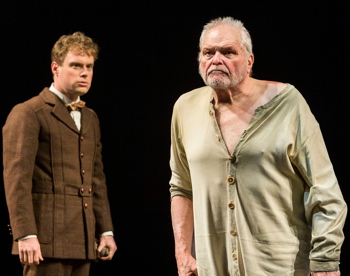 Heads up, serious theatergoers who are not looking for something frothy and easy for the holiday season. “The Steward of Christendom” at the Taper has plenty to sink your teeth into. There is nothing easy about it: Start with its being about two and three quarters hours long; then there are the Irish accents; throw in the fact that it would be a good idea, before the curtain, to brush up on the brief twentieth century Irish history helpfully provided in the program; all of that is even before you get to the sad tale of a 75-year-old man stuck in a benighted mad house, alternating between states of insightful clarity and raving confusion. If all that fails to deter you, it is a good bet you will end the evening feeling you have been privileged to have seen a fine piece of theater, well acted and beautifully presented.

The time is 1932. Thomas Dunne (Brian Dennehy), the last Catholic head of the Dublin Metropolitan Police, is lying, stomping or sitting in his barren, county mental home, masterly suggested by Kevin Depinet’s spare but stunning set. As head of the Metropolitan Police, Dublin Castle — the very symbol of British Rule — had been his to administer.  As he repeats several times, he “had risen as high as a Catholic could go.” It was his job to administer the castle as revolution, then civil strife, raged. His allegiances were to his job, his faith, and Ireland. When Michael Collins was assassinated, Dunne went mad. Collins was the one leader who brought the hope of stability to the warring sides. In his delirious reaction Dunne threatened his daughter with a sword. This episode led to his daughter’s placing him in the sorry excuse for a mental hospital we see on stage.

Through his rantings we learn the story of Dunne’s life. His losses are an Irish tale:  a wife who died at the birth of their fourth child; an 18-year-old son who died fighting for the British in World War I, ambitions that were thwarted by the strife around him. We see his visions as his daughters re-enact the various scenes he conjures up from memory. Twice his lost son wanders through as a 10-year-old wearing a soldier’s uniform (Grant Palmer for opening night) and singing in a crystalline child’s voice. The actual room is a form of sensory deprivation that could itself drive a person mad. His only interruption is from a cruel attendant, Smith (James Lancaster), whom he calls Black Jim, and occasional visits from Mrs. O’Dea (Mary-Pat Green) a much more caring employee who is trying to make a suit for Dunne as his only clothing is a grubby, stretched-out union suit. He frightened his grandchildren; they won’t come visit. He confuses his daughters’ names and identities; the most devoted one rarely comes. She was the one at whom he brandished his sword.

There is precious little arc to the story, yet “The Steward of Christendom” is one of the most powerful pieces seen locally in quite a while. Playwright Sebastian Barry has mined the dark corners of his family history for most of his writings. Knowing this gives added credence to what is played out before us. In lesser hands the sheer weight could become unredeemably oppressive. But true to Irish storytelling tradition, Barry’s words are glorious, the wry smatterings of humor ring true, and Dennehy’s delivery embraces everything from Dunne’s degradation to his dignity. The supporting cast is equal to the challenge of sharing the stage with such a commanding presence.

What is a story, this arc we have been taught to believe essential to a drama? A man’s life, the end of which we can predict at the moment of birth, generally needs to have a kicker at the end for us to accept it as fodder for the theater. In the final scene, through telling a story about his own father to the boyish ghost who has entered his room, Dunne comes to terms with the fact that he never really expressed his love to the son for whom he now pines. Whether that suffices as a kicker for most audiences is debatable, but it is true that in busy domestic lives we often fail to stop and truly tell the ones we love how important they are to us. The ‘Luv ya,’ so often tacked at the end of modern-day phone calls does not go the distance. Nor do 8-year-old boys want to sit still to hear our innermost feelings. I can feel the squirming as I write this. Homework needs to be finished, like it or not. Dishes have to be washed. You have to get to work on time. It is a daily repetition that is the antithesis of passion.

To be a great play, “The Steward of Christendom” could be tighter and more attention could have been paid to constructing the arc, but how many “great” plays are there? For a satisfying evening in the theater and an opportunity to see one of the great actors of our time giving his all, a trip to the Taper now is worth fighting the traffic. If you are looking for seasonal treats, best to go elsewhere.