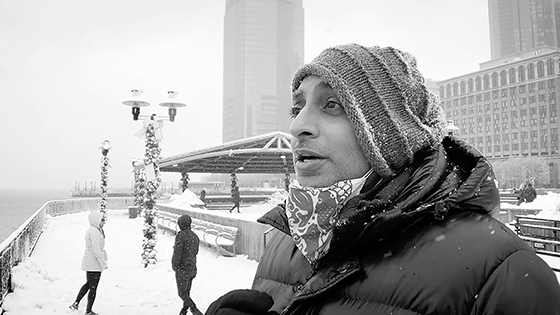 “The Waves in Quarantine,” Berkeley Rep’s artistic and impressionistic, although somewhat puzzling, series of six linked documentary films, was shot during the pandemic. The project’s foundation is the 1990 musical adaptation of Virginia Woolf’s 1931 experimental novel, “The Waves.”

Woolf’s book consists of soliloquies spoken by six characters who are friends (Percival, a seventh character, dies during the book and never speaks in his own voice.). The soliloquies span the characters’ lives but are interspersed with short third-person descriptions spanning the length of one day at a beach in Cornwall, England.

The original musical adaptation, which had a short New York run in 1990, was a collaboration of two-time Obie Award winner director Lisa Peterson and composer David Bucknam (who died at age 32 in 1998). “The Waves” was revived and reworked at New York Stage and Film in 2018. Adam Gwon has written additional music and lyrics. Since then, Lisa Peterson (“Culture Clash (Still) in America,” “The Good Book,” “Office Hour”) and Berkeley Rep Artistic Director Johanna Pfaelzer have been intrigued with resurrecting “The Waves” yet again.

And so, interrupted by the pandemic, Lisa Peterson, Raúl Esparza, and other theater professionals, filming remotely, using DSLR cameras and iPhones (cinematographer Zelmira Gainza), transmuted “The Waves” into “The Waves in Quarantine.”

Five of the six short experimental films (total elapsed time, 94 minutes) were shot at the homes and locales of the talented Broadway actors, Raúl Esparza (Tony Award nominee, “Company,” star of TV’s “Law & Order: SVU’), Tony winner Alice Ripley (“Next to Normal”), Carmen Cusack (“Bright Star”), Nikki Renée Daniels (“Book of Mormon”), Darius de Haas (“Kiss of the Spider Woman”), and Manu Narayan (“My Fair Lady”). Each actor talks to the camera about “The Waves,” Virginia Woolf, their lives, friendships, memories, and the pandemic. In the highlight of the production, they sing fragments from the musical version. Their abundant musical talents are glorious. In the sixth film, the mood is broken when the cast is filmed together chatting on Zoom.

Although there is much to admire about “The Waves in Quarantine’s” mood and occasional beauty, its intent and message are hazy at best and bewildering at worst. There is too much disparate content — the pandemic ruminations, the Woolf novel, and the smatterings of songs and instrumental music from the adaptation — to cohere into a satisfying whole. Yet, it is a fascinating example of theatrical experimentation and creativity.

Each film can be viewed in any order and as often as one wishes. It may be beneficial to view them more than once to glean the artistic thread and connection among the films. I didn’t read Woolf’s novel before watching “The Waves in Quarantine” since I thought that the project should stand on its own. However, reading the book first may prove advantageous for those who have the pandemic time and interest. Without knowledge of Woolf’s book, I felt at times that I was “playing catch-up.”

The film will be available on-demand through May 28, 2021. There is no cost to watch “The Waves in Quarantine,” but one must reserve in advance. https://tickets.berkeleyrep.org/waves/16074