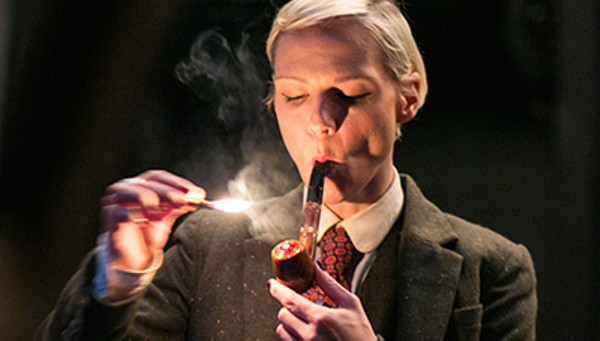 Madeline H.D. Brown as the Stage Manager in "Our Town"
© Cheshire Isaacs http://cheshiredave.com

In “Our Town,” three-time Pulitzer prize-winning author Thornton Wilder created a profound and intimate exploration into American life and death. And, although it was written over 76 years ago, the Shotgun Players’ version of the drama remains fresh and vibrant — still an important piece of American theater. Congratulations to the Shotgun Players and Director Susannah Martin for this winning production.

The Stage Manager (excellent Madeline H. D. Brown) serves as narrator and commentator. She explains that the first act opens in 1901 and follows the lives of the residents of tiny Grover’s Corners, New Hampshire, where neighbors know each other, doors are never locked and horses are still the mode of transportation. We meet the Webb and the Gibbs families, particularly Emily Webb and George Gibbs. Both El Beh, as Emily, and Josh Schell, as George, are first-rate.

In moving, almost existential, third act speeches, which illustrate the crux of Wilder’s message, the deceased ponder mortality and the human condition. Reliving a twelfth birthday, a dead townsperson becomes both a participant and spectator of the same event. But most importantly, it is lamented that the living cannot appreciate the value of their simple pleasures and day-to-day lives. I wish that these lines were given a slower reading to emphasize their importance. Wilder, in his preface to Three Plays, wrote, “’Our Town’ is not offered as a picture of life in a New Hampshire village; … It is an attempt to find a value above all price for the smallest events in our daily life.”

The entire cast of “Our Town” does great work and the short musical accompaniments add to the drama. There are also many light moments among Grover’s Corners residents as we watch life go on. While it is true that portions of the dialogue about religion, family, sexuality and race seem dated and a bit off, the essence of the play about life, memory and death remains intact.

Wilder employed a number of dramatic devices in “Our Town” that, when first presented in 1938, were avant-garde and are today commonplace — the scenery-less stage, the lack of a curtain, the use of unconventional theater seating, a narrator interacting with the audience and cast, the characters pantomiming their activities, speaking from the grave and posing as audience members with questions for the cast. He experimented with some of these techniques in two one-act plays that were produced by Berkeley’s Aurora Theatre in 2012, “The Happy Journey to Trenton and Camden” (1931) that tentatively used a stage manager, and “The Long Christmas Dinner” (1931) that tested the generational continuum of time and space.

In addition to “Our Town,” Thornton Wilder wrote other famous works, award-winning plays, “The Skin of Our Teeth” and “The Match Maker,” (on which “Hello Dolly!” was based), celebrated novels (“The Bridge of San Luis Rey,” “The Eighth Day”) and the screenplay for Alfred Hitchcock’s 1943 psycho-thriller, “Shadow of a Doubt.” In fact, he was already writing plays while a student at Berkeley High in 1915.

Although “Our Town” is still performed the world over and has been made into films, ballets and at least one opera, its unpretentious dignity remains its hallmark. It’s a hit for the Shotgun Players.

Reprinted with permission of the author from http://www.berkeleyside.com.