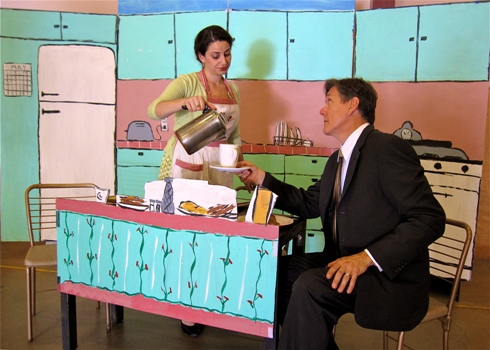 Where does one draw the line between opera and musical theater? The debate could fuel a heated exchange at a dinner party. In modern times Leonard Bernstein straddled the line with his jazz-infused scores. Pacific Opera Project, a fledgling Los Angeles company started by Josh Shaw with the mission of producing affordable opera, launched with Bernstein’s rarely heard, one-act opera, “Trouble in Tahiti.” Shaw says of his opening programming choice, “The main reason was to show that opera isn’t always Mozart and Puccini.”

“Tahiti” has been paired with Bernstein’s other one-act opera, “A Quiet Place” as they feature the same characters. “Quiet Place” has met with much less success, and he attempted to rewrite the two as a single piece with “Tahiti” inserted in the middle as a flashback. Recently performed in Manhattan, the duo again met with negative reviews. “Tahiti” on its own is a smart poke at the 1950s model of suburban perfection, with mom at home and dad at the office, off strutting his stuff and convincing himself of his own magnificence. The music is pure Bernstein, always a hit in my book, and his lyrics often rise to the level of Sondheim’s, my all-time favorite.

Pacific Opera Project is a low-budget operation. They make the most of a cleverly painted, flexible, low-tech set (presumably designed by Josh Shaw, as he is credited with production design and no one is credited with set design). The talents are varied. Mezzo Jessica Mamey stands out both musically and dramatically as Dinah, the repressed housewife whose imagination runs wild when she sees a movie matinee, “Trouble in Tahiti” (hence the title). Dinah’s plight can bring back memories of anyone who can recall the ’50s. Phil Meyer, who plays Sam, the self-absorbed, dictatorial husband, brings dramatic skill and a voice that is more Broadway than opera. It is easy to imagine him as a misogynistic character on “The Office.” They are backed up by a trio of jazz vocalists, the able Robert Norman and Ryan Reithmeier, and the generally disappointing Tara Alexander.

The evening opened with a medley of selections from Bernstein’s Broadway productions, “On the Town,” “Wonderful Town,” and “West Side Story.” The compilation clearly illustrated the point that the line between musical theater and opera is not a sharp one. Stephen Karr is the music director and pianist. Unfortunately this skilled musician played on a tinny piano. That, combined with Bernstein’s frequent syncopation, pushed the whole evening into the direction of jazz.