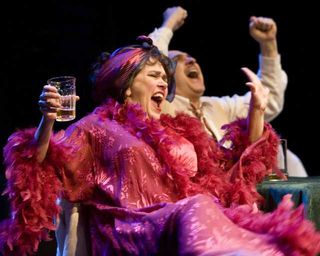 ‘Twelfth Night, or What You Will’

By William Shakespeare
Directed by Julia Rodriguez-Elliott
A Noise Within, Pasadena
Oct. 29-Dec. 16, 2011

“Twelfth Night, or What You Will” is such a well-regarded Shakespearean comedy that one approaches it as one would a Ming Dynasty vase precariously balanced on a window ledge of a highrise — that is, cautiously.

First staged in 1602, it has probably been staged at least 10,000, maybe even 50,000, times in every corner of the world save Antarctica, the Artic and the upper reaches of the Orinoco River basin in South America (although I wouldn’t bet five centavos that it hasn’t been put on there as well). “Twelfth Night” commands respect.

Let’s assume that most culturevulture readers are familiar with this play’s basic premise of mistaken identities; misplaced affections; a pair of fraternal twins, one male, the other female; a nobleman; a noblewoman; a rascally old uncle; his nitwitted friend; a fool (court jester); some household servants who just want to have fun; and an insufferable majordomo.

Directed by Julia Rodriguez-Elliott, this production is set in contemporary Cuba, which allows for some very colorful sets (Kurt Boetcher) and recorded music that would make the Buena Vista Social Club envious (Doug Newell of Zipline Sound).

All in all, the cast, the direction, the scenic design and the music combine into a flavorful mojito of a play, but….

My hesitation (and it’s not original with me) arises from the fact that spoken and written English has evolved and changed so much over the past 400-plus years that perhaps the Bard of Avon’s plays cry out for translation; do we need “SSL” — Shakespeare as a Second Language?

In print, his plays are usually annotated to explain dated, abstruse and colloquial words and expressions, all to help the contemporary reader better understand plot, character and action. But to do something comparable for theater-goers runs the risk of lèse majesté — who dares to rewrite the master?

Well, Leonard Bernstein dared, morphing “Romeo and Juliet” into “West Side Story.” And Cole Porter, Gil Junger and Carter Covington transformed “The Taming Of The Shrew” into “Kiss Me, Kate” on Broadway and “10 Things I Hate About You” into film and TV, respectively. Even though Shakespeare dealt with universal, eternal themes of love, betrayal, jealousy, sex, ambition, greed and foolishness, his now-archaic language more often than not leaves today’s audience in the dark.

Add to that the stilted, built-in cadences of Shakespeare’s lines, coupled with imprecise enunciation by many of the Noise Within the cast, and the accessibility of the play suffers accordingly. An admittedly unscientific poll of those leaving A Noise Within revealed that most couldn’t understand more than one-tenth of the material spoken that night.

What a waste of riches and more’s the pity for, as The Man Himself put it, “this is the short and long of it.”