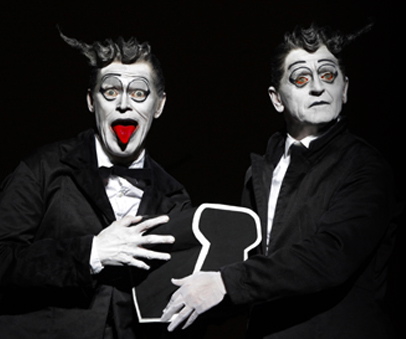 Don’t ask me what it means. The inspired nonsense that comes out of the fertile brain of Robert Wilson is meaningless, yet fraught with meaning — barely comprehensible but hugely entertaining — absurdism at its finest. There’s a story there but, as in “Einstein on the Beach,” you have to dig through the layers to find it. Or not. You can just let it wash over you and enjoy each wave as it rolls along.

And enjoyable “The Old Woman” is, mostly thanks to the multiple talents of its two energetic cast members, Mikhail Baryshnikov and Willem Dafoe. Now we all know about dance-icon Baryshnikov, who has turned to acting in his late-middle age, but Dafoe, the bad guy in a lot of good movies and perhaps best remembered as The Green Goblin of “Spider-Man” fame, is a revelation. He sings, he dances, matching Misha step for step, and he’s wildly funny to boot. Together these two guys are an unbeatable team, a dynamic duo, a marriage made in theatrical heaven.

That’s not all of it, though. You only see two performers onstage but director/designer Wilson may well be the star of this show. His lighting concept (beautifully executed by A.J. Weissbard) dazzles — turning faces green and hands red, setting bright crescent moons in an azure sky, using darkness, shadow and silhouette almost as characters. And his sets, with Magritte-like chairs and windows descending from the flies and colorful outsize roosters strutting across the stage, are delicious eye candy. Before the show even starts, a gorgeous three-dimensional fire curtain sets the absurdist mood. There will be another such, more colorful in a primary Joan Miro way, at the end.

And in between? Well, in 12 short scenes, separated by blackouts, you get your vaudeville shtick with the two performers in white-face, their hair ridiculously askew, prancing around with a ridiculous assortment of props. And you have meditative moments when they sit, side by side, on an enormous swing and recite a litany of hunger symptoms. Both in English and Russian. There’s quite a bit of Russian from Baryshnikov, translated and projected (rather badly) on a screen and echoed in English by Dafoe. Wilson is fond of repetition and whole scenes have the actors repeating the same things with different inflections. If you miss a line, count on it being delivered again — and again.

The piece is choreographed to a fare-thee-well, but Wilson also plays with the power of stillness. Just as, in the midst of music, strange noises, crashes and thunderclaps, there are spells of silence. There is a through line but it is slender. The “Old Woman” of the title, Dafoe relates, being overcome with curiosity, leans too far out the window and crashes “into a thousand pieces,” setting off a chain reaction of similarly defenestrating old women. Now the two men are stuck with the corpse and they don’t know what to do. If you listen hard you can hear a fear of death and the dead in their nonsensical remarks. The Old Woman holds a clock that is stuck at quarter to three. Time is of the essence, and maybe all that mugging and tomfoolery is just our way of keeping the Grim Reaper at bay.

Or not. That’s all the sense I could make of it but it doesn’t really matter when you are immersed in stage pictures and performances of this quality. Please, don’t ask me what it’s about. I just feel privileged to have experienced it.