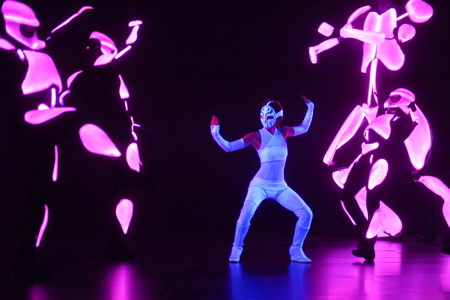 An old-fashion love story is transformed by technology in the new musical “Yoshimi Battles the Pink Robots,” receiving its world premiere at La Jolla Playhouse.

When a medical crisis lands Yoshimi in the hospital, tests reveal a larger war about to be waged. Advanced lymphoma has turned the previously protective white cells of her immune system into cancerous “pink robots” bent on her destruction.

The simple, but serviceable story has its underpinning in the psychedelic music of Wayne Coyne and The Flaming Lips. Coyne and Playhouse Director Emeritus Des McAnuff (“The Who’s Tommy,” “Memphis,” “Jersey Boys,” and the recent revival of “Jesus Christ Superstar”) co-wrote the story, integrating, as well as reimaging, Flaming Lips songs including the 2002 album from which the musical takes its title.

But familiarity with the Flaming Lips songbook is not a prerequisite for entry into the story’s blend of science fiction and realism. For example, an explanation of monoclonal antibody therapy in dialog would qualify the actors for tenured faculty positions at a major research university.

But Yoshimi needs exceptional powers and help in order to survive and enters into a fantasy world as a Japanese warrior against the pink robots who swarm relentlessly and menacingly about her. Only vivid patches of LED lights on the dancer’s heads, torsos, and limbs outline their amorphous shapes. Other robots fly through the air propelled by black-suited puppeteers indistinguishable from the black box of the stage. Try as you might, your straining eyes won’t find them.

Yes, puppetry, one of the oldest forms of theater, is a lynchpin of this production. And puppet master Basil Twist has a field day bringing to life a 14-foot pink robot whose entrance is jaw-dropping and whose humanity is pivotal to the story.

Bringing the robots further to life is costume designer Paul Tazewell, who faced the challenge of conveying 30 to 40 pieces of molded plastic per dancer with enough function and fluidity to execute Bradley Rapier’s fleet-footed choreography.

In a nod to the technological world in which we all live, scenic designer Robert Brill surrounds the stage with a glowing light strip that renders the often pitch-black space into a giant iPad with visual elements and effects (courtesy of lighting designer Michael Walker, sound designer Steve Canyon Kennedy, and projection designer Sean Nieuwenhuis) that appear and disappear as quickly as one can prompt an app.

But technology does not overwhelm the show. At its heart, the floating lyricism of the score, under musical supervisor Ron Melrose, and a talented cast make for a compelling evening of theater.