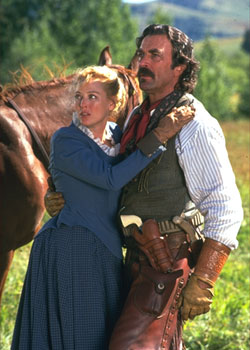 Westerns, in the form of books, films, and television programming, are an enduring expression of Americana, utilizing the majestic landscapes west of the Mississippi and the pioneer spirit of a frontier society as the background and underpinnings of tales of good guys prevailing over bad guys, cowboys and Indians (in often regrettably racist portrayals), gunslingers, sheriffs, whores and schoolmarms. More often than not the genre has functioned at the pulp level, populated with stock characters and scripted with melodramatic plotting. From time to time directors like John Ford and Sam Peckinpah have transcended the formula and created film art, but they are exceptional.

Amongst the writers, none was more prolific or successful than Louis L’Amour (1908-1988). His books have sold over 260 million copies over the years, capturing a reading public with the ability to spin page-turning yarns. L’Amour was propelled into success by Hondo, a 1953 film based on one of his short stories that earned him an Oscar nomination.

Crossfire Trail, a TNT original movie, is based on L’Amour’s novel of the same name. Rafe Covington (Tom Selleck) promises a dying friend that he will see to the safety of his wife and ranch in Wyoming Territory. Rafe and his sidekicks find the ranch deserted and in neglected disarray. The widow, Ann Rodney (Virginia Madsen), is living in town; when Covington tells her of his promise, she doesn’t believe him–her husband was killed by a Sioux raiding party a year ago, she says, though his body was never found.

Bruce Barkow (Mark Harmon) is the local boss; he seems to own the town and he has mean and slimy henchmen to see that his bidding is done. He’s avidly wooing Ann, keeping her in thrall by her financial dependency, since he holds the mortgage on the ranch. That’s the setup. What’s the truth behind the conflicting stories? Can Rafe save the ranch for Ann? And will he win her heart?

It is never difficult to predict the ending of a potboiler like Crossfire Trail. It’s how they get there and what happens along the way that make it interesting–or not.It would have helped a lot if there was any screen chemistry at all between Selleck and Madsen, but there’s no sizzle at all in their scenes together. The formula requires the hero to have his sidekicks, so a grizzly veteran (Wilford Brimley), a boyish innocent (Christian Kane), and an Irish immigrant (David O’Hara) are provided, an engaging enough bunch, if lacking any real quirkiness that would make for characters to remember.

The character that does stand out is the villain, Barkow. Mark Harmon oozes charm for Ann and puts on a toothy smile for his enemies, even as he delegates the dirty work to his henchmen. As the too-sure-of-himself blackguard gets foiled, his actions become more desperate and his climactic frontier-style power-play keeps some sparks flying.

Another big plus for Crossfire Trail is the scenery–stunning backdrops (presumably filmed on location in Wyoming) of snow-peaked mountains soaring over grassy valleys. David Eggby’s cinematography is fine and director Simon Wincer (Lonesome Dove) sees to it that everyone is where they are supposed to be, when they are supposed to be there, including the horses.

Crossfire Trail is not a distinguished addition to the western filmography, but it’s not an embarrassment either, and it might just provide lightweight amusement for a cold winter’s night in front of the TV.