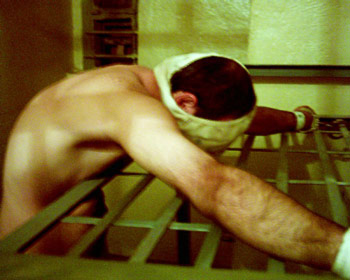 “It was a door that I was afraid to walk through. If you walk through it, at which point do you say it’s enough? What’s cruel enough? How do you get back from that? And I was afraid that I wouldn’t come back, that I would get lost.” these are the words of Israel Rivera, an American reserve soldier, speaking in filmmaker Rory Kennedy’s fascinating and chilling documentary, Ghosts of Abu Ghraib. It’s a moment of clarity and conscience that helps make Kennedy’s riveting film bracing rather than merely depressing.

Ghosts of Abu Ghraib, which first airs this Thursday on HBO, attempts to answer the question of exactly what happened at the now notorious prison. How did young American soldiers step over the line, “walk through the door” into the physical abuse and sexual humiliation of Iraqi prisoners? Using interviews with both the innocent and the guilty, the victims and the perpetrators, the critics and even an architect of the policies that led to Abu Ghraib, Kennedy succeeds in painting a portrait of incompetence, arrogance, and deliberate cruelty that started at the highest levels of Bush administration.

It is this emphasis on context that makes the documentary so fascinating. From the famous Milgram experiments on obedience and torture at Yale in the early 1960s, to the horror of 9/11, to the unprecedented decision by the Bush administration to essentially discard the Geneva Conventions on the grounds that Al Qaida “did not sign the Geneva Conventions and don’t follow any of the rules of warfare,” Kennedy reveals the history, the policies and the blunders that made the abuse exposed at Abu Ghraib not just likely but inevitable.

A few of the victims get their chance to speak. An Iraqi man looks at a picture of a nude, hooded prisoner. “That is my brother,” he says, and raises the photograph briefly to kiss it. Another struggles to keep his lips from trembling as he describes his elderly father’s decline and death at Abu Ghraib. The most compelling interviews are with some of the soldiers who were ultimately convicted and did time for the abuse of prisoners. They seem saddened and slightly dazed by what they’ve experienced, still groping for a way to explain what happened. “It’s easy to sit back in America or in different countries and say, ‘Oh, I would never have done that,’” says one “but until you’ve been there, let’s be realistic: You don’t know what you would have done.” It’s hard to look at these achingly young ex-soldiers and feel much rage towards them.

Far more chilling – and infuriating – is watching Bush advisor and Berkeley Law Professor John Yoo, author of a 42 page memo that laid the groundwork for the abuses at Abu Ghraib blandly explaining his incredibly narrow definition of torture, or Secretary of Defense Donald Rumsfeld stonewalling during a hearing on Abu Ghraib with an air of faux naivete that borders on open contempt.

Ghosts of Abu Ghraib is an invigorating and angry film that does not moralize or pontificate. It simply allows everyone to tell their story. And that, really, is what makes it worth seeing.