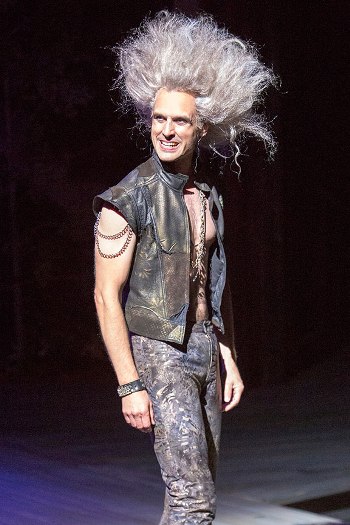 In the immortal words of J. Geils Band: “You love her/ But she loves him/And he loves somebody else/You just can’t win.” As simplistic as they are, these lyrics pretty much summarize “A Midsummer Night’s Dream.” For the most part, Love Stinks.

At its core, the Old Globe’s production is about three things: love, language and silliness. The love part is easy. Hermia loves Lysander; Helena loves Demetrius; Demetrius loves Hermia. Silliness comes with the territory, including dancing fairies with love potions and questionable attention to detail. Allegiances can shift rapidly.

The show is driven, in part, by this silliness, or rather the cast’s embrace of it. You get the feeling they’re enjoying themselves immensely. They seem to be anticipating the next whacky turn of events with great joy. As if to say: “You thought that was fun, check this out.”

But it’s the language that really energizes this production. I don’t mean Shakespeare’s verse — what could possibly be said that hasn’t been already? — but rather its delivery. Manic monologues, small comedic pauses, staccato bursts of dialogue. Every phrase seems mapped out to the syllable.

Shakespeare festival mainstay Jay Whittaker, who plays fairy king Oberon and Athenian king Theseus, centers the production. As Theseus, he is an authoritative straight man, who somehow still gets the joke. As Oberon he is an audacious prankster, playfully disappointed when his plans go awry. Miles Anderson, another festival veteran, shows off his comedy chops as the blissfully unaware Bottom.

The rest of the ensemble is uniformly excellent, with special kudos to the fairies, whose feral noises would spook anyone walking alone in the forest.

Just about everything works in this production, from the fairies cavorting on the stage to the insipid play within the play put on by Bottom and his fellow craftsmen. Talbot’s direction is pitched nicely, maximizing the overall oddness of the situations and wringing laughs from lines that may not have looked funny on the page.

Fortunately, “A Midsummer Night’s Dream” is a comedy, so love doesn’t stink too badly. Rather, love is funny, occasionally fantastical and ultimately a very good time.