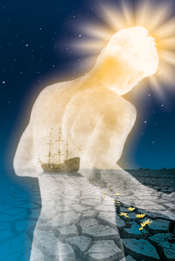 … Like virtually every other major production before it, the Royal National Theatre&#146;s Candide has undergone considerable alteration. One of the great flawed Broadway musicals, the show has been endlessly revised since its premier in 1956. Along the way it has been everything from an almost-vaudeville (in Hal Prince&#146;s 1973 off-Broadway incarnation) to a satirical opera, an approach which reached its apotheosis in Jonathan Miller&#146;s 1988 Scottish Opera production.

The chief target of Voltaire&#146;s satire is the theory of the 18th Century philosopher Leibniz that "all is for the best in the best of all possible worlds." Many of the work&#146;s observations are as relevant today as ever. Voltaire mocks the way in which war and greed are apparently accepted as inevitable elements of a civilised society. In Candide&#146;s – and our – world all soldiers are heroes (as long as they are on your side), the established church is hypocritical and romantic love brings with it the threat of fatal disease. In 1956, composer Leonard Bernstein and the show&#146;s original book writer, Lillian Hellman, were also attacking the empty nationalism of the Eisenhower years, set against a backdrop of McCarthyism, blacklists and witch hunts.

For this new version, director John Caird has made significant changes to Hugh Wheeler&#146;s book, itself a revision first employed in Prince&#146;s 1973 production, and these have resulted in two major improvements. First, the songs seem to spring from the text far more directly than before, thus making the evening more coherent and satisfying on a purely dramatic level. Secondly, in incorporating more of Voltaire into the libretto, Caird renders the contrast between the author&#146;s skepticism and the essential warmth of much of Bernstein&#146;s music all the more striking. This serves to further point up the show&#146;s central debate between the opposing philosophies of pessimism and optimism.

The production benefits greatly from a fine performance by Simon Russell Beale as both Voltaire and the philosopher – and Candide&#146;s tutor – Pangloss. The latter&#146;s philosophy, that every event, however disastrous it may appear, always turns out for the best in the end,

is countered by Denis Quilley&#146;s streetsweeper, Martin, who insists just as blindly that human beings are essentially malevolent creatures and that whatever can go wrong will go wrong. Ultimately, Candide&#146;s adventures seem to give credence to both theories and to illustrate Voltaire&#146;s point that there is no one single ideology by which we should live, no one perfect solution to life&#146;s problems. Rather, it is better to get on with the business of living and do what one can – in the words of the final number, to Make Our Garden Grow.

Caird&#146;s production, designed by John Napier, is admirably slick and moves with an almost cinematic fluidity. Bruce Coughlin&#146;s new orchestrations are most elegant, the difficult music is uniformly well sung and the choral sections particularly haunting. Daniel Evans is charming as the perennially innocent Candide. Alex Kelly&#146;s Cunegonde is suitably coquettish at the outset, displays increasingly desperate powers of manipulation and self justification as the obstacles pile up, and is ultimately touching as she finds a kind of redemption at the play&#146;s end. Beverley Klein&#146;s Old Woman, forever doomed to suffer the indignity and discomfort of possessing only one buttock, provides some of the funniest and most touching moments of the evening.

Candide is, perhaps, doomed to never quite work. Some of the songs still seem to hold up the frantic pace of the plot and, for all its momentum, there are occasional longeurs. However, the brilliance of Bernstein&#146;s glittering score has never been in doubt and this latest incarnation sets it off at least as well as any other. In addition, by incorporating more of Voltaire&#146;s text than ever before, John Caird&#146;s witty and exhilarating production comes closest to offering a coherent version of the book&#146;s philosophical debate. In the National&#146;s new staging we may have the best of all possible versions of a show which, for all its slightly blemished glory, continues to challenge and fascinate audiences over 30 years after its first production.