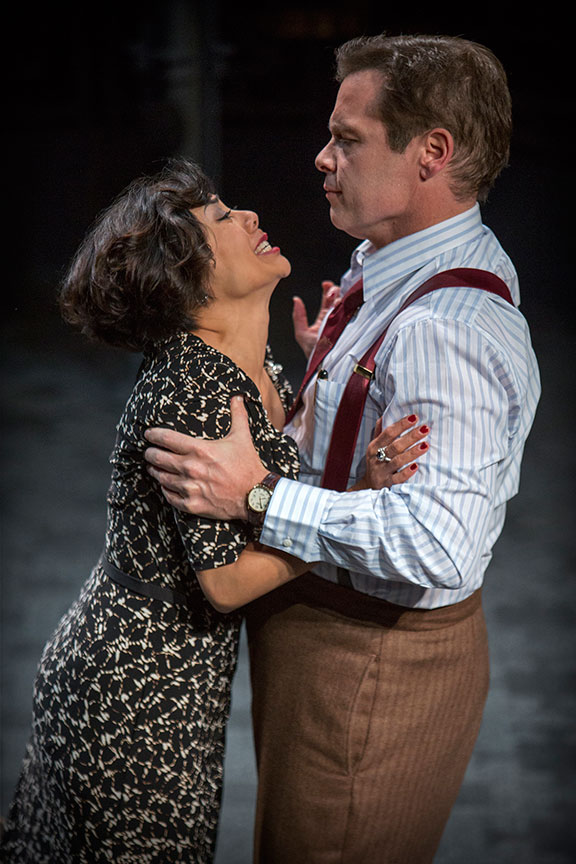 Lust, sex, greed, murder—sounds like a fun night at the theater. That’s the promise implicit in the Old Globe’s production of “Double Indemnity,” the play based on the book that spawned the classic noir film (and the semi-remake, “Body Heat”).

The story is simple. Insurance agent Walter Huff (Michael Hayden) meets Phyllis Nirlinger (Angel Desai) when he comes to renew her husband’s auto insurance policy. (This is 1937 L.A., and insurance agents make house calls.) There is an immediate flirtation, though Nirlinger’s interest in the paunchy insurance salesman requires some suspension of disbelief. Then they decide to kill her husband.

The play moves fast, as the two devolve from lovers, to plotters, to murderers, and it doesn’t really benefit from the velocity. While the movies, particularly the Fred MacMurray/Barbara Stanwyck version, offered a slow, nuanced seduction, the play doesn’t spend much narrative on building the relationship. There’s just not enough time to feel bad for the guy as he makes the worst mistake of his life.

The show lives and dies on the chemistry between Nirlinger and Huff, but unfortunately it’s simply not there. Hayden and Desai come together like mismatched puzzle pieces. Desai is at her best as the sultry seductress, but loses momentum in the more emotional scenes. Still, there’s an inherent creepiness in her performance that fits the play perfectly. Hayden seems miscast as the tough-talking insurance agent with all the answers. He’s just not noir.

By far the best performances come from Murphy Guyer, who plays both the doomed Herbert Nirlinger and the hard-bitten fraud investigator Keyes. There are depths to these characters: Nirlinger’s grouchy efficiency; Keyes’ almost supernatural ability to unwind a fraud. Guyer hits them both dead-on.

The direction comes off as both too fast and too slow: Too fast because we don’t have the opportunity to luxuriate in the seduction; too slow because the plotting and various reiterations of the plan seem endless.

Next to Guyer’s performance, the highlight is the set, which used scrims and projections to indicate rain, cigarette smoke and even the ocean. The rest is on a turntable, creating seamless, even cinematic, transitions between scenes.

There’s a certain quaintness to “Double Indemnity,” the old-style phones and radios, the occasional period references, the $50,000 payout from the insurance policy—a lot of money back then. It all seems more anachronistic than evocative. Perhaps it’s time for an update.