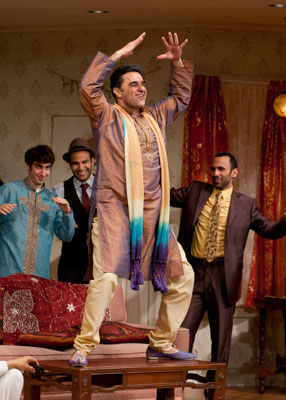 “Rafta, Rafta…” is a flawed, amusing, sometimes confusing foray into love, sex and Indian/British culture. Based on Bill Naughton’s 1963 play “All in Good Time,” “Rafta” is set in the Dutt family’s home in Bolton, England, just outside Manchester. Atul Dutt (Rachid Sabitri) has just married Vina Patel (Mahira Kakkar) and the couple has moved in with Atul’s family while they save enough for a place of their own. Their attempts to consummate the marriage are complicated by the close quarters of the house, the strained relationship between Atul and his father Eeshwar (Kamal Marayati) and the overriding expectations on young newlyweds.

Much of the comedy is derived from gently mocking Indian culture and anticipating that, yes, newlyweds have sex. The latter evokes the source material and perhaps a gentler, more naive time before “Jersey Shore” or even “Seinfeld.” The jokes come in fits and starts between long, sometimes laborious, sermons on immigration, lost friends and inappropriate relationships.

The show won the 2008 Olivier Award for Best New Comedy but seems to have lost some luster in the Globe’s production. Marayati was a late substitution in the Eeshwar role, and that may be hampering the cast’s chemistry. He is excellent in the comic segments but a bit wooden during the more dramatic parts. Still, the more problematic player is Sabitri as the young Atul, who often comes off as brutish and less than sympathetic. Geeta Citygirl Chopra (who can really dance) ably plays Eeshwar’s wife Lopa, who must help everyone navigate the many issues generated by young newlyweds and old memories. It’s not Chopra’s fault that her character must relentlessly shush her husband.

The set, a cross-section of a two-story British working class house, is excellently rendered. However, there is an odd scene at Atul’s work that could have been dealt with more imaginatively. Jonathan Silverstein’s direction, like Marayati’s performance, is brisk during the comedy and a bit leaden when things get more serious.

Still, “Rafta, Rafta…” has some hilarious moments and that almost makes it worthwhile.