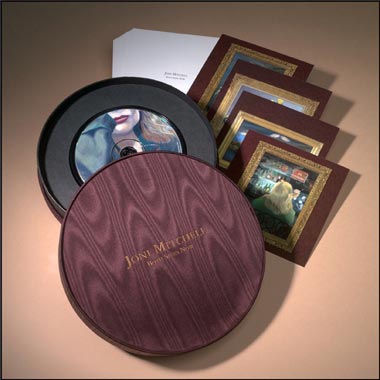 . This is, quite simply, a delight. After producing only three recordings during the nineties, Mitchell’s decision to deliver an album of covers might suggest a dearth of new ideas. Far from being a make-weight, however, Both Sides Now is a masterpiece fit to stand alongside her best work.

Comprised almost entirely of standards, the album’s songs have been structured "to trace the arc of a modern romantic relationship". A little contrived perhaps, but it is no accident that the idea of a themed collection should echo Sinatra’s classic 50s recordings. The songs by, amongst others, Rodgers and Hart, Harold Arlen and Vincent Youmans, are all exceptional and Mitchell’s graceful, heartfelt renderings are backed to perfection by a large orchestra arranged and conducted by Vince Mendoza. The singer’s phrasing recalls Billie Holiday, Peggy Lee and even Ray Charles and the interpretations are little short of extraordinary for an artist who, despite her undoubted brilliance, is generally associated with innovative, contemporary work.

Highlights include a dreamy, erotic "You’re My Thrill," an achingly restrained "You’ve Changed," a lush "Don’t Go To Strangers" and an almost hymn-like "Answer Me, My Love." Equally impressive are two new versions of her own compositions which fit seamlessly alongside the other tunes. "A Case Of You" remains one of Mitchell’s finest moments but the real revelation is the album’s title track. She sings "Both Sides Now" as though for the first time and her interpretation is both heartbreaking and gloriously uplifting. Here, one feels, is a woman who really has experienced the many facets of life and love. She presents her accumulated wisdom with a rare openness and lack of artifice and we mere mortals should just sit back, marvel and be very, very grateful.