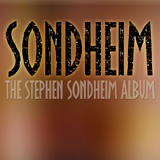 Producer Bruce Kimmel was responsible for a number of fine albums on the Varese Sarabande label. Recording both original casts and albums by a plethora of Broadway performers, he did much to encourage the renaissance in interest in the American musical as an art form. The bulk of his releases, even those which featured new material, tended to be traditional in sound so it is perhaps not surprising that the first recording on his own label should be of tried and tested material. Whether the world needs another Sondheim album is debatable but should not detract form the pleasures of this CD. Where other collections – such as Jay Records’s Sondheim Tonight and Kimmel’s own Unsung Sondheim – have tended to concentrate on the less familiar, The Stephen Sondheim Album, with a few exceptions, sticks with well known material delivered in a conventional manner. As such it should have a wide appeal to listeners relatively new to the composer (are there any?) and to those buffs who never tire of hearing their favourite songs sung by the kind of performers they were intended for in the first place.

The album kicks off with a relative rarity. "Make The Most Of Your Music" replaced "Live, Laugh, Love" in the 1987 London production of Follies. The number works fine out of context although it inevitably misses the irony and desperation of the original, missing the story which led to Ben Stone’s defiant yet empty declaration of success. The song is worth hearing again for some of Sondheim’s wittiest word-play and Brent Barrett’s interpretation is great fun. A far more technically accomplished singer than the number’s originator, Daniel Massey, he approaches the final monumental note with appropriate confidence. Another ‘lost’ Follies number never made it to the stage. "It Wasn’t Meant To Happen" is movingly sung by Michele Pawk and, once again, leaves one marveling at the genius of a composer who can afford to discard numbers of such quality. The other rarity on the album is a real ‘find’. Emily Skinner sings "I Must Be Dreaming" from All That Glitters, one of the ‘assignments’ Sondheim produced for his mentor Oscar Hammerstein. The song is pretty if unremarkable and written in a traditional, operetta-ish style that its author employed in far more sophisticated form in "Night Music" and the Follies pastiche, "One More Kiss."

The other numbers here are more or less familiar from "I’m Still Here" and "Broadway Baby" to "Saturday Night’s A Moment With You" and "So Many People." The latter is beautifully sung by Tami Tappan and shows just how sophisticated was the young Sondheim’s approach to an apparently conventional love song. Other highlights include Jane Krakowski’s sweetly sung "Anyone Can Whistle," Lea Delaria’s understated "Broadway Baby," Norm Lewis’ big-voiced pairing of "With So Little To Be Sure Of" and "Who Could Be Blue?" and Alice Ripley’s haunting "Another Hundred People." "I’m Still Here" is such a perfect song that one almost just has to hit the notes and adopt the right attitude and it does the work for you. That said, Dorothy Loudon finds just the right combination of triumphalism and vulnerability to place her version amongst the better ones on record.

There a couple of less successful moments. Ruthie Henshall’s "Children Will Listen" is lugubrious and lacks warmth. Some have taken issue with Dame Edna’s version of "Losing My Mind." I found it mildly amusing but unlikely to repay repeated listenings. CD’s can be programmed – skip it if you don’t like it and, let’s face it, undue reverence can be the death of this music.Give me La Everage knocking the wind out of Sally Durant Plummer over opera stars singing Rodgers and Hammerstein any day.