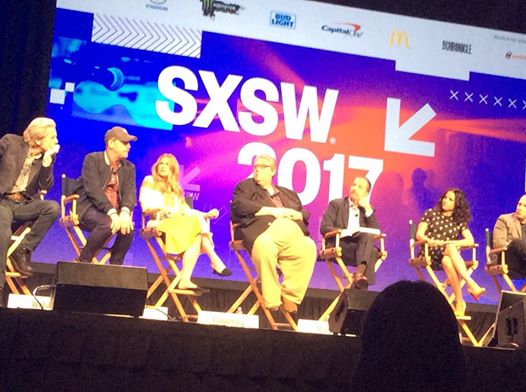 Joe Biden may have been the most accomplished former vice president to speak at this year’s SXSW multi-media festival in Austin, Texas — but Selina Meyer was easily the funniest (in clips from the upcoming sixth season of “Veep”, premiering April 16th) as the cast and executive producers of HBO’s savage political comedy revealed the following alternative facts about their show to real news panel moderator Chuck Todd:

1. JULIA LOUIS-DREYFUS IS THE FUCK POLICE

Extravagantly foul language in the corridors of power has been a hallmark of “Veep” since the show was launched by Armando Iannucci (“The Thick of It”, “In the Loop”) back in 2012. After the fourth season, Iannucci stepped down and Dave Mandel became the new sheriff in town (as head writer and executive producer), yet star and co-EP Julia Louis-Dreyfus maintains that she’s “the fuck police” on set, making sure expletives aren’t overused in the dialogue but rather saved up for the best and most creative explosions of profanity possible (though she estimated her co-star Anna Chlumsky, as Selina Meyer’s former chief of staff, Amy, is probably the character who actually SAYS “fuck” the most on the show).

2. IF YOU SAY YOU’RE A DAN, YOU’RE PROBABLY A JONAH

The creators of “Veep” built their satiric parallel universe version of Washington, D.C. by studying the real thing with a journalistic eye for detail. As a result, the cast frequently hears from true Inside the Beltway types who watch the show and recognize bits of themselves in recurring characters like Reid Scott’s handsome, smooth-talking political shark Dan Egan or Jonah Ryan, a buffoonishly incompetent product of nepotism played by Timothy Simons (who noted during the panel that most young staffers on K Street and Capitol Hill like to think they’re the Dans of their office, “but you know most of them are really Jonahs”).

3. THE REAL DAN IS THE WORST PERSON ON EARTH

Simons and Reid then acted out the moment they’d met a certain unnamed insider rumored to be the actual inspiration for Dan (lovingly proclaiming him “the worst person on Earth”). According to their recreation of the scene, Simons asked the man if he’d like to go meet the actor portraying his fictionalized counterpart, and the real Dan said, “You bring him to me. I don’t go to him.” Then, after Reid was summoned, the politico looked him over dismissively and shrugged, “I guess I can see it.”

4. IT’S HARD NOT TAKING IT PERSONALLY WHEN SOMEONE SAYS YOU LOOK LIKE A
PANDA

Meeting reprehensible people is one thing, but portraying them comes with its own set of challenges. As noted by Sam Richardson (who plays Jonah’s dim but avuncular wingman, Richard Splett), a thick skin is required when, for instance, the writers liken his character’s physique to that of a chubby panda. Simons agreed that it’s definitely hard not to feel insulted when his lookalike alter-ego, Jonah, is described as, say, a “shaved sasquatch” (or worse).

But for Gary Cole (a.k.a. Kent, the former presidential strategist who joined a consulting firm with Selina at the end of last season), the main challenges of the show are primarily mental. “I hate math,” he admitted by way of explaining the anxiety he feels when faced with the daunting techno jargon spouted by his pollster character on a regular basis…

…while Tony Hale was busted as the actor most likely to break up during his scenes as Selina’s “body man” Gary Walsh (a role that earned him the most thunderous applause of any cast member save Dreyfus when he first took the stage at SXSW). With Selina no longer president, Hale said he gets a lot more of Dreyfus to himself in the new season, although that also means he wound up laughing more in their scenes together — to the point that his co-star had to remind him (half-joking, half-scolding) that he was actually ON the show, not just watching it.

7. MATT WALSH IS A MONSTER

Yet, as nearly every cast member admitted, the single greatest difficulty most of them faced while filming the sixth season was simply dealing with the diva fits and monstrous ego of Matt Walsh, whose befuddled incompetence as White House press secretary Mike McClintock on “Veep” has only recently been eclipsed by that of Trump’s mouthpiece, Sean “Spicey” Spicer. (Note: CultureVulture’s fact-checking department would like to state that part of the previous sentence was actually fake news. Further research has revealed that the nasty comments about Walsh were merely a running gag throughout the SXSW panel, and by all accounts the cast couldn’t be happier to be working together — partly, as Tony Hale noted, because they support each other’s scenes and also know when something isn’t working, as opposed to certain projects he’s been on where nobody seemed to notice or care when things weren’t funny.)

8. IF YOU WANNA KNOW WHAT’S NEXT, KEEP YOUR EYES ON OBAMA

Surprisingly, the cast and creators of “Veep” likewise don’t see the trumped-up absurdity of Washington’s “new normal” as an obstacle for the show. As Mandel explained, the upcoming season was “written before the election results,” and thus doesn’t attempt to out-crazy the current administration. Indeed, since Meyer lost her bid for the presidency in season five, Mandel said her character’s future is based on past presidents. “As you watch Obama, Bill Clinton, Jimmy Carter, there’s an incredible world there,” Mandel teased. “Foundations, libraries, humanitarian work — so if you think about it, you’ll start to figure out a lot of what the season is.”

9. OPTIMISM IS THE NEW PESSIMISM (AND VICE-VERSA)

Even more surprisingly, given the current political climate and the show’s pitch-black cynicism, Chlumsky, for one, says that she’s grown a bit more optimistic about democracy after meeting a lot of the people “Veep” parodies and seeing how hard some of them work. (Though, on the opposite end of the spectrum, Simons countered that he’s grown more pessimistic after his exposure to the inner workings of American governance, but only because he started out way more optimistic than Chlumsky.)

10. JULIA LOUIS DREYFUSS IS NOT A TERRIBLE MOTHER, SHE JUST PLAYS ONE ON TV

And finally, though Selina Meyer won’t be winning any mother-of-the-year awards on “Veep” given her odiously narcissistic parenting skills, Dreyfus concluded the SXSW panel with a shout-out to her son, Charlie, whose team, the Wildcats, was on the verge of its first-ever NCAA Tournament win for her alma mater, Northwestern. Sadly, Charlie’s team was eliminated in the second round…but if sports don’t work out for him, there’s always politics.