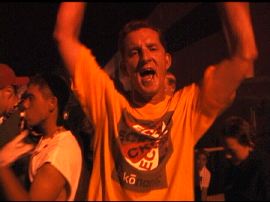 Buzzed: The Straight Dope About the Most Used and Abused Drugs from Alcohol to Ecstasy (1998)

The Politics of Ecstasy

The HBO documentary series America Undercover spends 90 minutes at a stretch wallowing in the shallower puddles of human existence. Typically, the show&#146;s producers find an individual or a group in some sort of crisis, often involving illegality of one stripe or another. The goal is titillation, with education a low second priority&#151;there&#146;s honestly little to be learned from the people documented on the series.

Small Town Ecstasy breaks with the general tone of America Undercover&#146;s prior films, in that it is actually possible to come away with a variety of valuable insights from the story on offer. The show is about Scott, a 40-year-old divorced father, and his four children&#151;Job (20), Craig (18), Heather (15) and Sam (13). Scott has been introduced to the rave scene, and Ecstasy, by Craig. The two of them go out on the weekends, with some of Craig&#146;s friends, and stay up all night, dancing in a drug-fueled trance. Occasionally, they bring Heather and Sam along.

Scott is a weird guy. More than a little geeky already, his enthusiasm for this new lifestyle makes him seem mildly retarded sometimes. It&#146;s entirely possible there&#146;s a lot we&#146;re not seeing, though, because his son seems to respect him and treat him as a legitimate authority figure. There&#146;s none of the embarrassment teenagers often feel for parents who try to act hip to their kids&#146; interests.

At one point, Scott is seen at his job, which appears to be either construction, lumberjacking, or tree surgery. (In any case, it involves a bulldozer, a chainsaw, and trees.) He says, quite emphatically, that he never takes Ecstasy when he&#146;s working. He also mentions, at another point, that he pays all his bills and is a responsible person. So, if anything, he&#146;s a good example to the kids of how recreational drug use can be managed, without the automatic and irrevocable destruction emphasized in most mainstream media.

He&#146;s also still aware of his role as a protector. One lengthy sequence documents a party at which Sam and Heather want to take Ecstasy for the first time. Scott is there, and is already &#147;rolling&#148; (his term) himself, but forbids the drug to the children. He gives them money, though, and they buy it from a fellow partygoer. When Scott finds out, he doesn&#146;t yell at them, though he&#146;s clearly disappointed. Instead, he stays close by them for the rest of the night, guiding them through the experience. In its own way, it&#146;s about the best job of parenting he could have done, under the circumstances.

Scott&#146;s ex-wife is not as understanding as the filmmakers. When she reads one of her daughter&#146;s letters (why she was intruding on her child&#146;s mail is never explained) and finds out about the drug use, she calls the sheriff, and Scott is arrested for drug possession. (The show ends without any resolution regarding his fate.) The film&#146;s second half revolves around his legal problems, the extremely limited, supervised custody he&#146;s grudgingly granted, and the tear-stained faces of his children, who want to see him as much as he wants to see them.

The filmmakers are clearly biased towards Scott. He&#146;s the one they&#146;re following around with the cameras; his ex-wife is only seen in a series of Dateline-style talking-head interviews that appear to have been shot in one sitting. (She also turns up at a family breakfast at the tail end of the documentary.) Small Town Ecstasy isn&#146;t advocating drug use, though, any more than it&#146;s attempting to hector its viewers about the dangers. What it seems to be saying is, people do drugs. Sometimes their lives fall apart, but that can&#146;t always be attributed to the pollutants in their bloodstream. After all, Scott and his wife divorced before filming began, and long before he ever tried Ecstasy. Exactly what caused the split is never disclosed; all that&#146;s offered is a brief mention that the couple&#146;s &#147;dreams&#148; were no longer the same.

In fact, this documentary has very little to say about drugs. It&#146;s really all about this family&#146;s relationships. It&#146;s worth watching not to learn how to tell if a child is using drugs (the goal of just about every other &#147;drug-related&#148; TV-movie in the world), but to learn how to be a good parent. Scott is, for the most part, a pretty good parent.