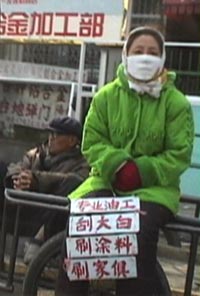 The Return of the God of Wealth: The Transition to a Market Economy in Urban China

The last decade amounts to no more than a blip on the Chinese time line&#151;the longest surviving civilization in the world&#151;but the economic and social changes that China went through in the late nineties will to have a lasting impact on this populous country&#146;s future. In the nineties, the communist government in China embarked on a process of market-driven economic reforms that forced scores of state owned money-losing enterprises to improve their efficiency and shed their excess staff. The extent of this change, and its consequences, are difficult to gauge because of the difficulty of obtaining media access in China.

Despite media restrictions, since 1998 the Frontline team has been allowed to film the lives of several ordinary Chinese and document their change in fortunes under the new economic climate. The result is a riveting insight into the life of the common man in China and a better understanding of a country going through the first convulsions of a newborn market economy.

For many young Chinese students in the erstwhile communist regime, the conclusion of high school meant a job waiting at the local machine tool plant. Feng Hui-xiu, a prim-looking woman with a bob-cut, went from high school straight into the &#147;Number One Machine Tool Plant&#148; at Beijing. When the Chinese premier, Zhu Rong-ji Synch, refused to subsidize state owned enterprises any more&#151;&#147;There is no more money&#148;&#151;Feng feared, not only angry reprisals from the workers, but losing her own position. For this wiry forty-four year old, it would be difficult to get another job as a manager&#146;s assistant. Ultimately, she voluntarily retired from her job and went into business. She is philosophical about her previous life and sees some non-economic differences. &#147;In a state company, there is selfless contribution…When I am here (in business), my words are short and to the point…Relationships are based more on money.&#148; Her longing seems genuine, not a dig at a television crew from the cradle of capitalism.

At another Beijing plant, the story of excess debt and labor continues, and much the same set of fears is expressed by Wang Hao-ren, whose friendly face belies the stress he is working under. The Iron Rice bowl that is his country is no longer the worker&#146;s paradise. The market economy has opened the common man&#146;s eyes to what seems like a new set of longings (like hiring decorating companies for the house) that in turn give rise to newer frustrations. It seems as if the Chinese worker has exchanged an old set of problems&#151;dreary, unchanging life&#151;for a more vibrant lifestyle that is relentless in its uncertainty. For Wang Hao-ren, professional uncertainty translates into frequent bouts of worrying for his child, underscoring the irony that in a market economy, whether American or Chinese, some headaches are universal.

Outside Beijing, in the northern industrial cities such as Shenyang, the economic situation is even grimmer. The local steel plant is one of the largest employers in the city, but is preparing for massive layoffs. The laid back work environment is a thing of the past. Frontline interviews a young woman at the plant, Zang Shu-yan, whose beautiful face always contains a hint of melancholy. Zang, like the other interviewees, is nostalgic for the old days: &#147;Before the reforms, it was different. I could do the work or not do the work. If I wanted to do it, I did it. If I didn&#146;t want to do, I didn&#146;t.&#148; Now, she pleads with party officials to save her job. Her husband is ill and cannot work, and she has to pay for her children&#146;s education.

Frontline follows the Mayor of Shenyang, Mu Sui-xin, who seems practical, determined and, in the tradition of a true-blue American politician, media friendly. The camera seems to reflect off Mu&#146;s drive and ambition as he whisks from one meeting to another, encouraging and reprimanding in turn the obsequious government officials he encounters. In what is the most startling turn of events&#151;and for Frontline, an unexpected twist to its story&#151;the Mayor&#146;s professional future turns dark towards the end of the documentary.

In rural China, where a majority of Chinese live, economic reforms had been introduced even earlier with peasants allowed to cultivate and market their own crops. As a hoary old woman, Tian Xiao-wei, states, &#147;Now you can do anything and no one will be against you as long as you make money, and the government loves it.&#148; But there are others who are struggling to make ends on a meager salary. Hong Huanzhen, a woman with a thyroid problem and a son with a mental illness is an example of the failure of the Chinese health care system to take care of the poor in post-socialist times. Her family&#146;s salary is grossly inadequate to take care of the medical expenses, pushing her family further into penury and depriving her young daughter of educational opportunities.

But others have benefited from the reforms. Zhang Wu, a Beijing yuppie whose occupation&#151;corporate image consultant&#151;seems to embody the current pre-occupation of China, has seen his fortunes rise spectacularly from a dead end job at a state packaging company to Beijing Amstrong, a company he founded that has an American style work ethic: hours, more hours and overtime. Interviewed among the gleaming high rises and glitzy work stations that have become a part of the urban Chinese landscape, Zhang is elated: &#147;As long as you have money, you can do anything,&#148; he says. He has moved his family into a luxury apartment and has hired nannies to take care of his kids.

Factual accuracy is always at risk when a trend&#151;in this case, the worsening conditions of the Chinese people&#151;is projected from a few chosen examples. But the treatment humanizes the story and gives it much needed local color. Nevertheless, the documentary does look at macro issues such as wide-spread corruption and faulty national economic policies through two economic experts. The exhaustive nature of the documentary is both its virtue and its drawback. Some viewers may find its two-hour length exhausting.

The current generation of Chinese, whose memories of communism are blurry, may find the documentary a little skewed in its pre-occupation with people in their middle-age. The few teenagers interviewed in the documentary do not have the luxury of nostalgia; they are learning to deal with the system without recourse to the glories&#151;imagined or otherwise&#151;of the past. Despite the inspiring presence of the image consultant, Zhang Wu, China in the Red, as the title suggests, is mostly about the vast multitudes scraping the bottom of the Chinese economic barrel. They are the stowaways in the Chinese voyage to the market economy.