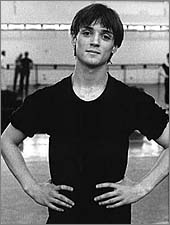 Buckle on your swash me hearties, the pirate ship is heaving into view. Those on board include dashing brigands, skulking villains, scantily clad harem beauties, a lecherous pasha and various maidens in distress. If you want to dress for the occasion, anything from a turban to a tutu will do.

If ballet is arguably the most contrived of the arts, Le Corsaire may be the most contrived of ballets. Familiar to American audiences mainly through the pas de deux, long performed by Rudolph Nureyev and Margot Fonteyn as a technical showpiece, American Ballet Theatre has ambitiously mounted the entire work, which was recorded live at the Orange County Performing Arts Center in Costa Mesa, California.

This convoluted tale of pirates and harem girls had its beginnings in the mid-19th Century and has been choreographed and re-choreographed numerous times since then. Not only is the dancing a pastiche of style, no fewer than five composers have contributed to the score. All of them are represented in the current ABT revival.

That said, we admit it&#146;s not altogether a bad sail. The dancing is lovely and the pasha and villains are pretty funny. If Ethan Stiefel&#146;s hero is more boyish than dashing and Julie Kent, his lady love, is less spitfire than china doll, the secondary characters are right on the money. Angel Corella as the pirate chief&#146;s slave, Paloma Herrera exhibiting a gorgeous line as the Pasha&#146;s slave and Vladimir Malakhov, the slave trader, provide some of the best moments in the show. As for Michael Owen&#146;s overfed, bumbling Pasha, don&#146;t ask. He&#146;s a riot, which is not easy to do when you&#146;re dancing.

Nobody is supposed to take this stuff seriously anyway, a tone that is set in the preview to the show. Artistic director Kevin McKenzie, sitting on a stool backstage, explains that you probably won&#146;t follow the ins and outs of the admittedly silly plot and then proceeds to tell it to you anyway, with the help of the principal dancers, the guy who steams the wrinkles out of the costumes and even a stagehand or two. It&#146;s a clever device but gets a little old as it is repeated twice more, at the beginning of each act.

Besides, it ain&#146;t that hard. Pay attention, there may be a quiz. There&#146;s this pirate, Conrad (Stiefel), see. So, he goes to the bazaar on slave selling day and, quicker than you can say "tours jete." falls in love with the enchanting Medora (Kent). She throws him a rose (shades of "Carmen") and they are in each other&#146;s arms. But the evil slave trader has other plans. He wants to sell Medora to the Pasha along with the lovely Gulnare (Herrera) in kind of a package deal. Hiss, boo and some terrific dancing by Malakhov who has the peculiarly Russian trick of seeming to hesitate in mid-air on his leaps. So, anyway, the Pasha buys the twin set but, before he can sample their wares, Conrad and his crew kidnap Medora and take her and a bunch of other harem slaves to their secret grotto. Got all that? End of Act One.

The Grotto Scene is the site of a pirate mutiny, a truly elegant love duet, the administration of a mysterious sleeping potion and the re-kidnapping of Medora, this time by the bad guys, but it is most notable for the famous pas de deux. Here, in a bow to tradition, it is turned into a pas de trois, with Medora handed back and forth between Conrad and his slave (Corella). Soon, however, Conrad fades into the scenery, it becomes the slave&#146;s show &#150; and quite a show it is. Anyone who remembers Nureyev&#146;s spectacular leaps and turns, his bare chest gleaming under the lights, will be moved to nostalgia. For those who don&#146;t, this is the next best thing. Corella is an athletic marvel, nicely balanced by the delicate pointe work of Kent.

Act Three brings us to the palace of the Pasha, to which Medora has been returned. There you will be treated to a rousing battle between the rescuing pirates and the Pasha&#146;s men, treachery punished, true love rewarded and a shipwreck. But, before any of that happens, the Pasha has to take a nap, during which he dreams that all his wives (the entire female corps de ballet) turn into flowers and dance in his garden for him. This scene, partially set to music of Delibes, lifted from a much better ballet, is so overlong, so kitschy, we suggest you might take a nap as well.

Kent and Herrera dance prettily &#150; and endlessly &#150; while the other girls wave rose-laden hoops giving a kind of Busby Berkeley effect. A pointless divertissement that stops the action would be fine if the dancing justified it but this "Jardin Anime" sequence has the weakest choreography in the piece. The corps begins beautifully enough but eventually is reduced to just waving the hoops. Boring.

Some of the best ensemble work &#150; and best choreography in the show &#150; comes out of the pirate scenes which are, sadly, too few and far between. Steps based on ethnic folk dancing, no toe shoes and spirited tunes make a nice contrast to the ethereal pointe work of Kent and the harem girls.

Le Corsaire may be a silly, spotty and long voyage but there is some wonderful dancing along the way. Besides, isn&#146;t it nice to watch something other than dancing Nutcrackers at this time of year?