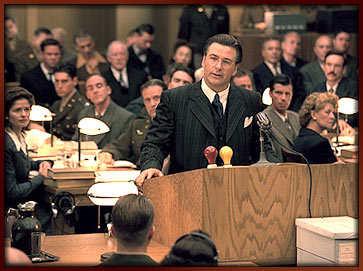 It’s a pity the new TNT miniseries "Nuremberg", adapted from Joseph Persico’s nonfiction novel, doesn’t sustain the queasy ambiguity of its first few minutes. Just surrendered Hermann Goering (Brian Cox) is greeted warmly by his American captors and joins them for a rousing chorus of "Deep in the Heart of Texas." His wife and children look on lovingly and the joy on the face of the man who claimed credit for inventing the concentration camp is infectious, or, in context, distressing.

The miniseries moves back to a more comfortable position in the next scene, as a horrified Supreme Court Justice Robert Jackson (Alec Baldwin) contemplates prosecuting Goering and the other Nazi war criminals. It’s the kind of scene where a character, out of nowhere, looks up at a portrait of Franklin Roosevelt, and suddenly declares "I can’t believe he’s gone. For me it was like losing a father."

The rest of the four hours alternates between the same sort of clumsy exposition of the heroic prosecutors and awkward scenes of the Nazi prisoners contemplating their fate. Extensive use is made of a prison psychologist, Captain Gilbert (Matt Craven), to lay out all the characters’ motivations and to explain helpfully that everything that happened can be understood by the absence of empathy.

Cox’s performance makes Goering’s appeal immediately apparent. He’s able to convey to whomever he’s talking that he’s letting that person, and that person alone, in on a joke. Yet he might turn on them at a moment’s notice. Every character in the film is almost comically desperate for his approval, from his guards, to the fellow prisoners, to, eventually (the film implies), the Nuremberg judges.

Everyone, of course, except for Jackson. As played by Baldwin, he’s relentlessly fair-minded, rejecting every chance to take an unfair advantage against the prisoners he’s prosecuting. He’s decent, patriotic, and only opposed in his aims by Nazis and jealous competitors, like the American judge Francis Biddle (Len Cariou). Jackson is having an affair with his secretary, Elsie Douglas (Jill Hennessy) to be sure, but that’s supposed to be all right because his wife is a bitter shrew.

It’s difficult to forget during Baldwin’s scenes that he’s the executive producer of the miniseries, though someone really should have told him that this stolid role works against his talents. As written, the role is impossible to play, and its conception unintentionally ends up creating sympathy for the Nazi defendants, since their main opponent is such a sanctimonious prig.

The chemistryless romance between Douglas and Jackson takes up large segments of the film that might better have been used to explain the unusual courtroom procedures at Nuremberg. All of the trial scenes are taken from the transcripts, but anyone who isn’t already familiar with the trial will be lost. Early on, there’s debate among the judges and the prosecutors as to who should be allowed to defend the accused, but it’s never resolved. None of the defense lawyers are identified. It’s never made clear what their role is or what their defense strategy is or how they feel about their clients.

The film focuses interest on just one judge, Biddle, and that’s only to supply a petty irritant for Jackson. When the film presents them deliberating on the case, the audience has no idea what motivates the way they handle the proceedings. The trial scenes don’t build up any tension, because it’s impossible to see what’s at stake. Except for a brief battle of wits between Jackson and Goering, the prosecution seems unopposed.

Yves Simoneau directs solemnly, but a crass glibness breaks through occasionally. When actual film footage of the death camps is introduced as a surprise piece of evidence, the footage is cheapened into the tackiest form of courtroom melodrama.

In the end, all the window-dressing of the legal drama and moral ambiguity falls away and it becomes clear that the whole four hours are really a tribute to the greatness of the lead prosecutor, star, and executive producer.