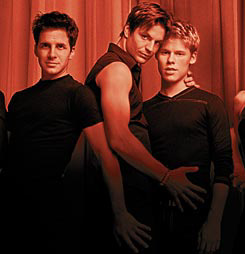 "The thing you need to know is, it’s all about sex." That’s the first spoken line in Queer as Folk, Showtime’s remake for the American market of a British series of the same name. Notice has been given, then, of what’s to come and Queer as Folk delivers on the promise. There’s plenty of frank language and plenty of onscreen sex and nudity, from exploration of the dark "play" room of a gay discotheque, to the deflowering of a 17-year-old preppie hungry for initiation, to intimate moments between Lesbian lovers.

In view of widespread animosity in the United States toward gays, Queer as Folk will inevitably instigate protest, undoubtedly anticipated with relish by the producers for all the free publicity that controversy will generate. Those who will view the show with built-in prejudices are given plenty of material to massage their bigotry, as it were, but it can be safely said that, while the show enters new territories of frankness on American television, it isn’t prurient. It is about sex and, to its credit, the sex scenes are not simply gratuitous titillation but actually go beyond the merely physical and explore the emotional side of gay sexuality.

Brian (Gale Harold) is a gay Don Juan, impersonally screwing just about everyone who crosses his path, as icily mean, selfish and self-centered as they come. He’s a successful advertising executive and lives in the expected designer loft. He’s also the biological father of a newborn son, carried by a lesbian friend (Thea Gill) who is raising the baby with her Jewish attorney lover (Michelle Clunie). An unstated suspicion does develop that under Brian’s bravado, there is an unfulfilled core. The predictable plotline would have fatherhood mellow Brian into a more responsible adult; let’s see if the series surprises with a less cliched development.

Brian’s best buddy, Michael (Hal Sparks), is sweet, sensitive and thoughtful, all the things that Brian isn’t. He’s crazy about Brian, but he’s in denial about that, wondering why other relationships don’t work out. Michael is closeted at his job in a retail discount store, providing another area in which gay/non-gay interaction can be observed. His mother, a waitress at the local gay coffee shop, is a brassy, salt-of-the-earth type, totally accepting of Michael (as well as her gay brother). Sharon Gless, remembered for her Emmy award-winning work in Cagney and Lacey, makes a welcome return in the role.

The other major character is Justin (Randy Harrison), the prep school kid who makes a quick entrance into gay life in the first episode. His mother (Sherry Miller) confronts him over his gayness and finds an advisor in Michael’s mother.

On the positive side, Queer as Folkis well acted, swiftly paced, and lavishly produced. It certainly doesn’t pull any punches as it deals with the lives of young urban gay men and the characters are an engaging bunch. The early episodes suggest the potential for some rounded character development that will rescue the series from the soapiness which threatens ominously to start sudsing at every moment.

To a point, the series seems schematic, as if a list of "types" and issues had been drawn up first and the script written to encompass the list. (Remember the stock World War II movies in which the squad had to have one Italian, one Black, one Jew?) Even so, there will doubtless be criticism from the "politically correct" – where are the poor gay people? the gay people of color? the gay intellectuals? the gay people for whom sex is not the central activity in life? the gay people who do not go to gyms? But it’s unfair to expect a television series to be a manifesto for a political movement that proclaims, "We are everywhere."

In its frank approach, Queer as Folk has the potential for examining aspects of gay life in the format of entertainment for a broad audience. (And give them credit for carefully acknowledging safe sex practices). The more significant question is whether the script will ultimately do better than stereotypes, cliched characters, and predictable outcomes. It’s too early in the series to say whether it will transcend the sentimental and the melodramatic. The first few episodes introduce the cast of characters and are dense with events. From there the series could go either way, developing some depth and quirkiness and unpredictability in its characterizations, or skimming over the surface like so many rubber duckies floating on the soapy waters.

(Review based on early epsiodes of first season) – Arthur Lazere