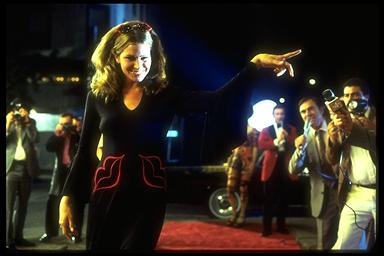 Rated X, Showtime’s new film about porno kings the Mitchell Brothers, opens with a ludicrously portentous scene. Jim Mitchell (Emilio Estevez, looking in his bald wig like a sadsack community college Willy Loman) sits in a Lazyboy and listens to his brother Artie (Estevez’s real brother, Charlie Sheen) scream death threats over an answering machine. Lightning crashes, music blares, and the camera, tilted askew and darting madly, keeps reminding us that we’re supposed to be frightened. When one of the threats triggers a flashback and we leave this paranoid funhouse, it’s a disappointment. The opening is so silly that it seems to promise a camp spectacle, a film to be savored for its sheer awfulness. Sadly, nothing else in Rated X is quite this bad, or this weirdly invigorating.

Jim and Artie Mitchell were opportunistic sleaze merchants who landed in exactly the right place at the right time. Stung by a professor’s criticism, Jim left San Francisco State College’s filmmaking program in the late ’60’s and began cranking out hardcore porn as a stopgap measure on his way to becoming an American Godard. Working cheaply, with a group of young filmmakers, he infused grindhouse nudie films with student film pretensions. Once his brother Artie signed on as partner, the radical filmmaking shtick was put aside in favor of whipping together product for their O’Farrell Theater. Their numerous obscenity arrests only added to their countercultural allure, and they grew richer by the day.

Their careers peaked with Behind the Green Door, a hugely successful feature starring former Ivory soap model Marilyn Chambers. Concocted by Artie but directed by Jim, it launched an empire. It also exacerbated Artie’s resentment of Jim, and by decade’s end he was lost to his cocaine addiction.

If this all sounds somewhat familiar, it is: P.T. Anderson’s 1997 Boogie Nights covered the same milieu with far greater verve. Anderson’s film got by on its goofy exuberance. Its opening ninety minutes was such a sustained blast of energy – as if the young Scorsese had made a disco and polyester musical – that it saw us through its shrill, monotonous final hour, where each character pays for their transgressions and follies with a series of grotesque humiliations. Rated X is a bargain basement version, its hyperactive camera and rock video editing used to pump interest into an essentially banal, moralistic tale. The difference is that, for all his excess, Anderson has a precise feel for cinematic pyrotechnics. When his camera snakes through a house party, latching onto one conversation, catching its punch line, then backing into another, he’s not just showing off: he’s capturing the pixilated, surprised delight of wandering, a little high, through a great party. When director Estevez tries for the same effects, they’re belabored and offputting. The flash never speaks to the material, so the camera just gets in the way of the story.

Anderson also managed a sense of proportion. Like the Mitchell Brothers, Burt Reynolds’ Jack Horner has pretensions to art. But when he finally achieves his masterpiece, Anderson shows it for the laughably inept detective film it is. Rated X treats the Mitchells as misunderstood artists and never gives us a chance to judge their work for ourselves. They make extravagant claims for their films, and then we see their audiences applauding. There’s no evidence of their achievement in anything but entrepreunerial terms, so we’re left having to trust the film when it implies that they were doing something grander.

The film’s stunt casting is its primary inspiration: two actor brothers, known as much for their off-camera sexual gamesmanship as for their thespian skills, sign on to play the porno Cain and Abel. Nothing really becomes of the parallels. Sheen plays Artie as a consummate sleazeball, but never gives the sense that he’s enjoying himself, or investing the role with lived experience. He gives the same blank, somewhat dazed performance he usually gives, albeit in an ugly leather jacket and shades. Estevez is marginally better, if only because Jim’s sober demeanor demands less showboating. Odder still, the two brothers never create a feeling of family. There’s no spark between them that might suggest years of shared jokes or buried resentments.

For all the flash of its camera work and the sensationalism of its subject matter, Rated X is a cramped and careful film. It never rises above the level of a television biography, though its story demands excess and audacity. It took extraordinary caution to make a film this boring from the Mitchell Brothers’ story..