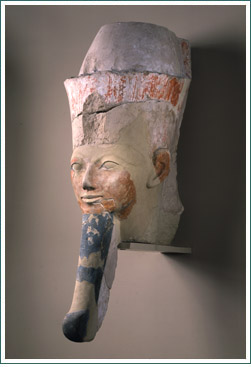 Mother About to Wash Her Sleepy Child

Sister Wendy Beckett is a Catholic nun who lives in seclusion in a trailer, abiding by vows of solitude and silence. Fortunately, her work as an art historian and teacher have allowed her sufficient flexibility in her practice to permit her to travel and to create television documentaries in which she shares her insights into the great art of the world with a large international audience. The contradictions that emerge — reclusive nun/television star; pious devotion/open-minded inquiry; vow of silence/articulate speaker; conservative religion/progressive, humanist world view–only add to the effectiveness of this one-of-a kind phenomenon.

Sister Wendy’s American Collection is a new six hour series, airing on PBS in three two hour segments, each hour devoted to a different great American art museum. It’s a collection of highlights of art from ancient to modern and from all over the world, with beautifully executed cinematography that brings the viewer close in to the works and also lingers over the architecture of the museum buildings and a bit of local color in each of the six cities visited.

Sister Wendy is particularly good at finding and relating the storyline in a painting or sculpture, seeking its meaning from the surrounding circumstances and the context in which the work was created. This approach is particularly effective in dealing with works that draw their subject matter from specific historical sources, such as Copley’s portrait of Paul Revere or Velazquez’ portrait of Juan de Pareja. If, from time to time, her commentary seems to stretch beyond the actual content, to overread the canvas, as it were, it is surely in the interest of adding a dash of extra drama — as does the occasionally intrusive music on the accompanying soundtrack. Surely the works themselves don’t need such artificial enhancement.

Certain patterns can be detected in the choice of works shown. There are a great many religious works covered, though it is impossible to say if the number is skewed from the proportions of religious works in these collections. Surely, much great art has been inspired by faith over the centuries and it is to her credit that Sister Wendy evenhandedly covers art from a broad spectrum of religions–from Tibetan Buddhas to medieval works in the Metropolitan Museum’s spectacular Cloisters to a Hindu fertility goddess.

In dealing with the latter, Sister Wendy once again displays the ease and acceptance with which she confronts the exposed human body, noted in earlier series. The ability to do so–and to deal openly with issues of sexuality in art– might not be remarkable in your average docent, but in a nun it takes on an added degree of perspective.

There is also a recurring feminist theme in Sister Wendys’s choices, such as a perhaps disproportionate time allotted to Hatshepsut, the only female pharaoh. Her remarks on a work once attributed to David, but later determined to be by Marie-Denise Villers, make a legitimate case-in-point about attitudes towards female artists. Discussing Rosa Bonheur’s spectacular canvas, "The Horse Fair," the good Sister segues from the observation that Bonheur had to wear pants to attend the fair and sketch her subject matter to further mention that Bonheur had a "live-in girl friend." It seems a tad coy to avoid the word "lesbian" at this stage of the game, and absolutely silly to then say that Bonheur’s real passion was the horses. That’s sort of like saying that Oscar Wilde’s real passion was the theatre.

But Sister Wendy recoups with elan when she says about Mazzanti’s "The Death of Lucretia": "A bimbo, too, has a heart to break and a life to lose." Ya gotta love this teacher.

Sister Wendy appropriately chooses a large number of great American works to show and discuss: Bellows, Cassatt, Diebenkorn, Puryear, Inness, Homer, Eakins to name just a few. It’s a welcome focus, especially since American works are so underrepresented in the European collections which earlier programs have covered. And the range of media included goes beyond painting and sculpture to porcelain, silver, glass and haute couture.

What is missing in the six hours is an underlying theme to connect the great diversity of objects shown, aside from the fact that they have come to rest in American museums, which is not in and of itself much of a unifying point. Sister Wendy tends to focus on one work at a time and she’s far more interested in the content of the works than in technique or the place of the work in the history of art. It would surely add some depth and understanding to have occasional comparisons set up, contrasting, perhaps, how two artists have dealt differently with a similar theme.

The result is six hours of fine viewing with a wondrous variety of art on display. But, in a way, it’s like a box of very rich chocolates–best tasted in small bites. Viewers might be advised either to tape the series or to purchase the videos. Watching the segments one hour at a time might be more pleasurably paced than the two hour stretches of the telecasts.