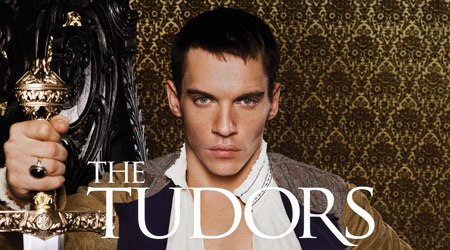 The Tudors, an exuberant and engrossing series about young King Henry VIII, begins on Showtime on April 1st at 10:00 PM ET/PT.

I watched six episodes of The Tudors while I was home with the flu. Not only did they hold my interest despite my hazy condition, but they also intrigued me enough to search out my old textbooks on English history. The background was helpful.

King Henry is not yet thirty years old in the first episode that begins in 1520, but he has been on the throne since 1509. His father, Henry VII, was the first Tudor. He took the throne despite his convoluted claim to it following the War of the Roses. Henry VIII was the second son of Henry VII and only rose to power upon the death of his older brother, Prince Arthur. To keep relations with Spain on an even keel, Henry VIII married Arthur’s wife, Katherine of Aragon (daughter of Ferdinand II and Isabella I).

Although Katherine vowed that her marriage to Arthur had not been consummated, the question of the validity of Henry and Katherine’s marriage and the efficacy of the Pope’s dispensation to allow the marriage haunt Henry. Also disturbing Henry is his lack of a male heir, which he fears is caused by God’s disapproval of his marriage. And thus enters Anne Boleyn. She is portrayed as a calculating vixen who seduces King Henry at her father’s bidding.

The European political situation at this time is also very complicated. England, France, the Holy Roman Empire and the Pope jockey for position with alliances made and broken as well as treaties signed and ignored. And internally, Henry must guard against traitors and usurpers.

It is interesting to see the beginning of the Renaissance when Henry talks with his advisors, Cardinal Woolsey and Sir Thomas More, about the new Humanism movement of human worth and individual dignity. We also see Henry launch an English navy. It is fascinating to watch him wield power autocratically and impetuously. For example, relations with France sour after Henry loses a wrestling match to the French king.

Showtime has spent close to $40 Million on The Tudors. Gorgeously filmed in Ireland, each episode contains multiple scenes of Henry’s life in his castles and his court, with all the details of furniture, costumes, tableware and music carefully recreated. Much of the episodes are filled with the whispers of political rivals, beheadings, jousts, tennis games, and sexual liaisons.

I am sure it will be said that The Tudors is Showtime’s answer to HBO’s The Sopranos. After all, both sagas revolve around a powerful autocrat, his family and underlings, and involve loyalty, treachery, warring forces, illicit sexual liaisons, competitive male behavior and religion. But unlike The Sopranos, approximately 85% of The Tudors is based on actual events, according to its writer, Michael Hirst. He is also the author of the screenplay of Elizabeth and so has a fine grasp on how to entertain his audience while staying largely true to history.