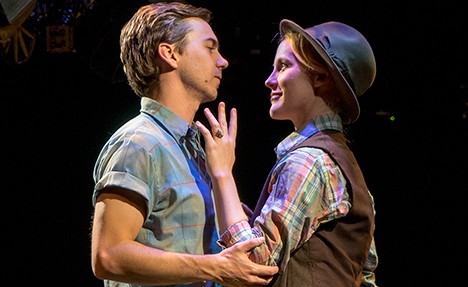 “As You Like It” is certainly one of Shakespeare’s more joyous efforts. Most of the action takes place in the Forest of Arden, a quaint, magical place where love can (and does) flourish; the villains don’t persist for long, other than in the deep background; and there’s lots of lovely music.

This year’s University of San Diego MFA production, embraces that joy, while giving a nod to the overwhelming strangeness of the setting and the people in it. Everyone seems to get the joke.

The show starts with bad Duke Frederick (Lorenzo Landini) banishing his brother good Duke Senior (Nathan Whitmer), who gathers a small party and repairs to Arden. Despite his hostility towards the former duke, Frederick does allow Senior’s daughter Rosalind (Ally Carey) to remain with his daughter Celia (Makha Mthembu). However, that doesn’t last long, and Frederick soon banishes Rosalind, who is joined in the forest by Celia and the fool Touchstone (Ajinkya Desai). Rosalind masquerades as a man and Celia as his sister.

As always, the MFAs do a lot with a little: a step ladder is basically their only prop. But you wouldn’t think this group was still in training, given the confidence and verve with which they take on Shakespeare.

As the play cross cuts between various characters falling in love, the actors seem intent on bringing the fun. Carey instills Rosalind with a sense of wide-eyed anticipation throughout and Mthembu more than keeps up as the somewhat disbelieving Celia. Her eye rolls could stop moving vehicles. Petzold is less than believable as a wrestling champion – you can almost see him flexing his muscles to maintain the illusion – but more than makes up for it as Rosalind’s besotted love interest.

The whole cast steps up. Amy Blackman lends an ironic tone to the world-weary Jaques. Desai and Suzelle Palacios have great chemistry as Touchstone and Audrey. Kevin Hafso-Koppman excels at guitar and song, though it seems half the cast picks up a guitar at some point.

Director Waldman does a fine job, using the entire theater and never letting any of the cast rest (see eye rolls above).

There’s a temptation to treat the annual MFA show as if it’s playing for lower stakes, but that feeling is certainly not shared by the MFAs. They left everyt