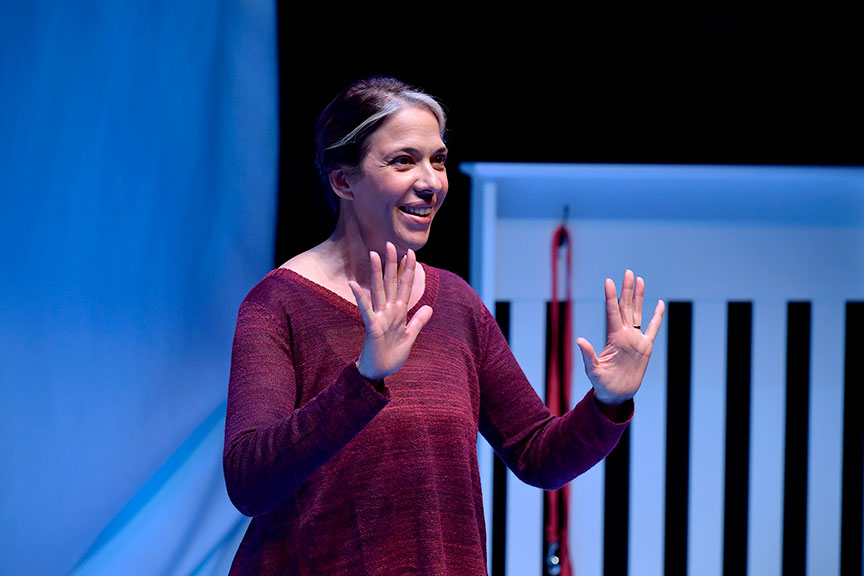 a new play at the Old Globe Theatre, San Diego

Mala is a smart, insightful play about the slow motion losses we experience as our parents age. We go from being completely dependent on them to mutual independence to them being dependent on us. Nobody is happy with this transition, as we take over their finances, attempt to wrest away their driver’s licenses, escort them to doctors appointments and eventually watch them die.

Melinda Lopez wrote Mala and plays the only character, also called Mala. The show is based on her own personal experiences, but they’re not hers alone. These scenarios are playing out a billion times over.

Set in a suburban living room amidst a snowy landscape, Mala is a series of abrupt stories – taken from notes the character (and playwright) wrote on her iPhone. The title comes from a particularly thorny situation, during which the character’s mother refused to go to the hospital after a fall. The mother yells at her and her older sister, calling them “Mala.” It’s Spanish for bad, but the word encompasses more than just a bad action – it means bad to the core.

The natural tendency would have been to focus on the relationship between Mala and her mother, but Lopez brings in a world of stories about the character’s father and sister. In addition, Mala takes on different personas, their names projected on the snow, telling their own stories about parental decline and filial response.

Exploring these different points of view is both interesting and confusing. There are lots of voices – and more sisters than I could count. It was like reading a royal history – I wanted a family tree to track the relationships.

These many stories are heartfelt and honest expressions of guilt and frustration. Guilt that they’re not doing enough for the people who brought them into the world; frustration that they have to do it in the first place.

And yet, despite all these fraught stories, the play seems emotionally agnostic. On a purely personal level, my mother was 92 when she died, the same age as Mala’s mother. All the caregiving moments she describes, I’ve done them. Hearing these stories, and remembering my own versions of them, I wanted to feel more.

I came away surprised that Mala never reached me and continue to overanalyze. Was it my fault or Lopez’s? I can’t honestly say. I admire her for what she’s trying to do; I’m just not sure she gets there.

Taming of the Shrew

Playwright James Ijames was awarded a Pulitzer Prize earlier this year for his play ‘Fat Ham’ which was a virtual...
Theater

Two guys from Cleveland yammering away about LeBron James and the Cavs. For the better part of two hours. Now...
Theater